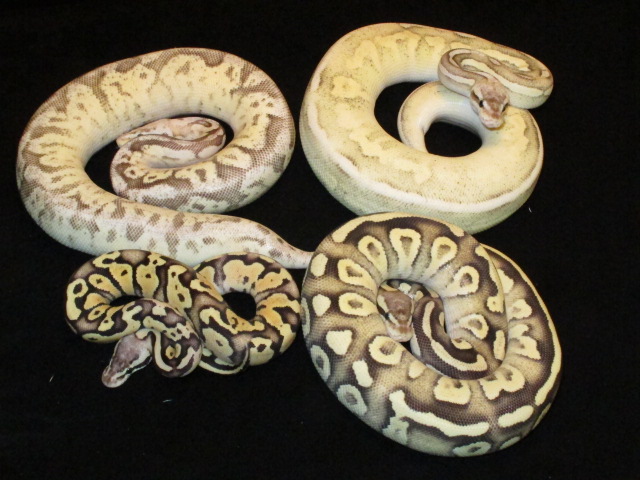 The mota project is something I and a handful of others have played with the past couple of years and have made some really cool babies from.  The project started from a pair of imports I got at the very end of 2009 from David Fernandez before he stopped bringing in all the cool CH (captive hatched) dinker projects from Africa.  The pair had a very Black Eyed Lucy complex animal look and just like any dinker project, I had the mindset no way they were normals and certainly worth playing with. 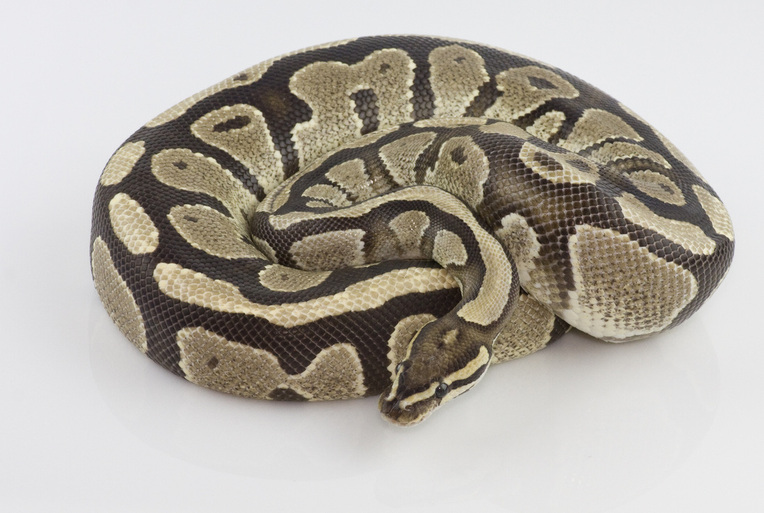 Once I had gotten the pair up to size I figured I'd take the safer route and be conservative with the male and only breed him to the import female that came with him, 1 pastel female, and 1 normal female, just so I could see what the super looked like and what the offspring looked like before putting him to a ton of females.  Of course things always work out better in theory than they do in real life and I could never get a lock from Mota x Mota.  Gotta love how certain male and female pairs just will not breed.  It's always the pairings you are anticipating the most!  Of course the normal laid and produced half normals and half animals that looked like the father that all had the typical black eyed lucy allele look.  The pastel female laid a 3 egg clutch but I did end up hatching one pastel mota that was absolutely smoking hot and still just as smoking hot today as an adult!

Below: Mota Pastel adults and babies 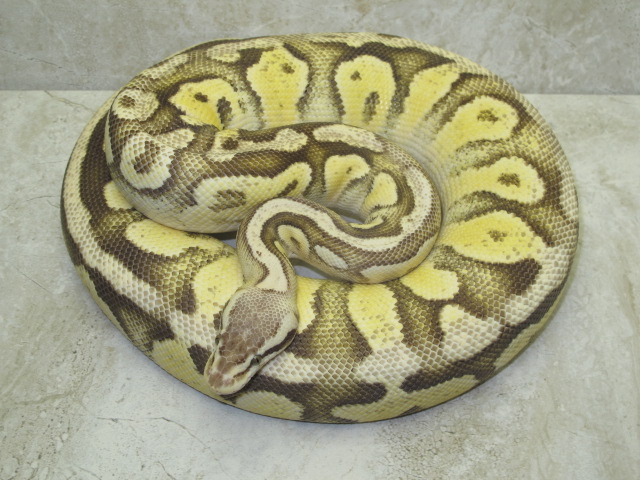 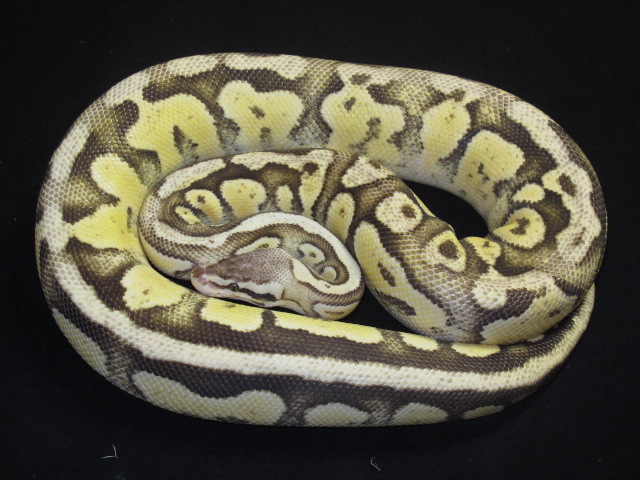 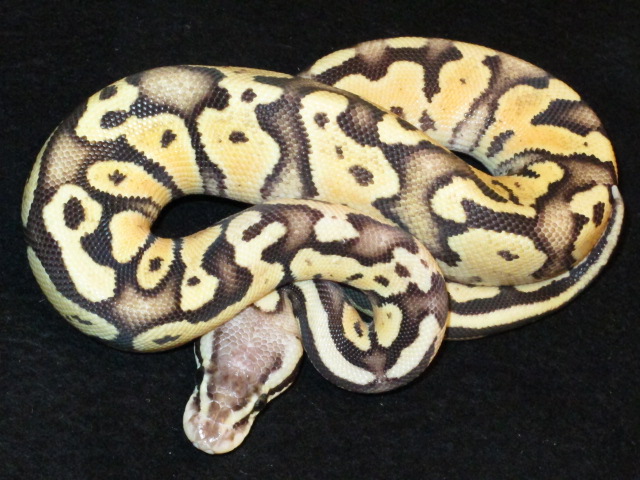 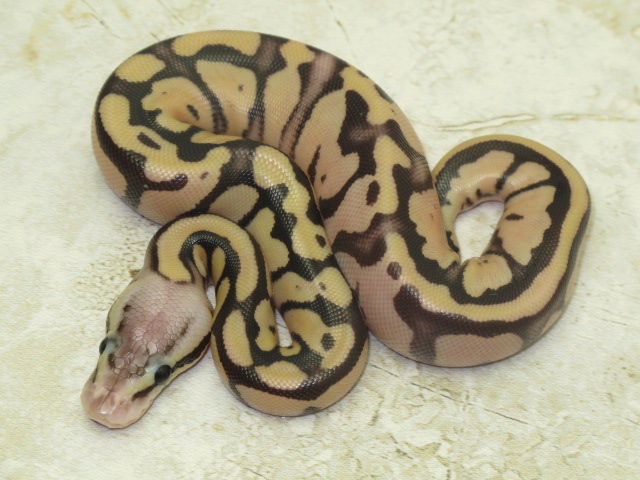 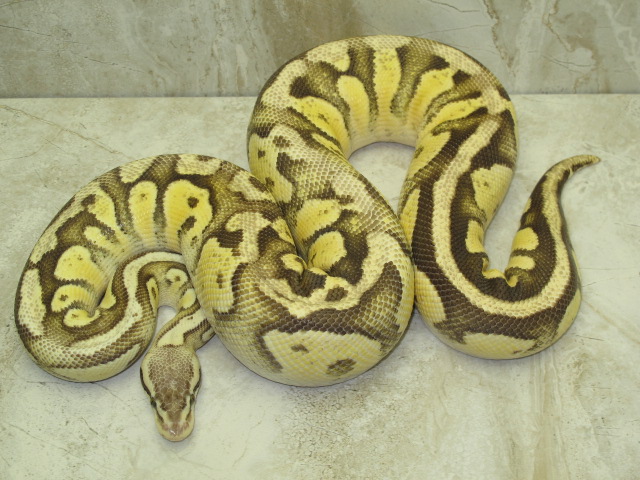 Once I laid my eyes on the first mota pastel I was very pleased at how nice and clean she was.  I shared some pics and many agreed they blew away a lot of the super pastel fires on the market which says a lot since she was just a single copy pastel combo!  I still was not convinced it was something new and excited without seeing a super.  To me, so many people will take a male and breed the cheapest priced morph they can find just because it has a gene and sacrificing quality to get a "better deal".  With that in mind it isn't really that hard to believe the pastel mota blows a lot of super pastel fires away because they weren't produced from quality pastels to begin with.  So I turned down any offers I got on them and instead kept them for myself as any ball python hoarder would do.  However, I was at this point willing to shoot for some more combos to see what else the gene could do.
The following season again my most anticipated pairing in the project was Mota x Mota.  I still could not get them to breed each other but the male would breed other females no problem.  I produced a male in the pastel x mota clutch the year before and had him up to size so figured I would try that boy out but no luck.  The original mota female wasn't having that either.  At this point I tossed in a CinnamonMojavePastelSpider male to see if it was the female not being receptive or the mota x mota pairing itself just not going to happen.  Of course he locked her right on up and at this point I figured I'd keep trying for a pairing to see the super but I wasn't letting her go unbred again this year and would gladly take a clutch from the 4 gene boy vs nothing.  That certainly was an outcome I could not complain about as much as I wanted to see a super. 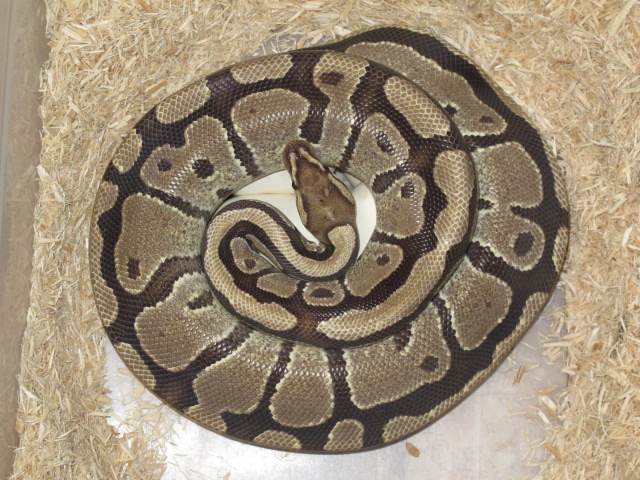 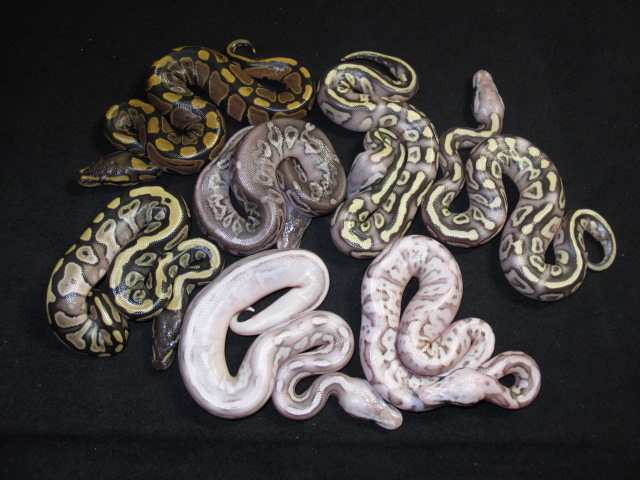 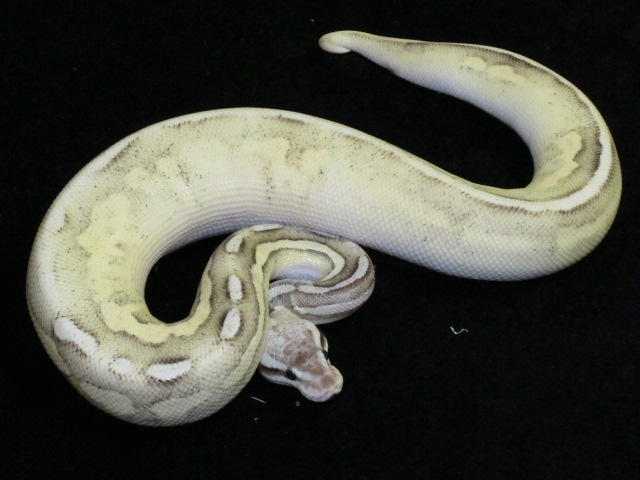 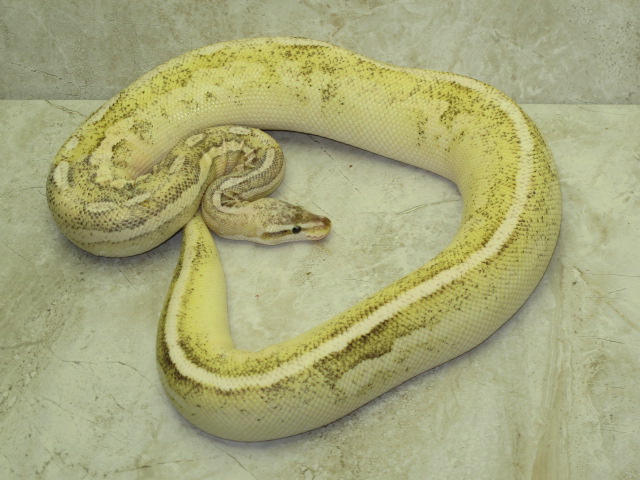 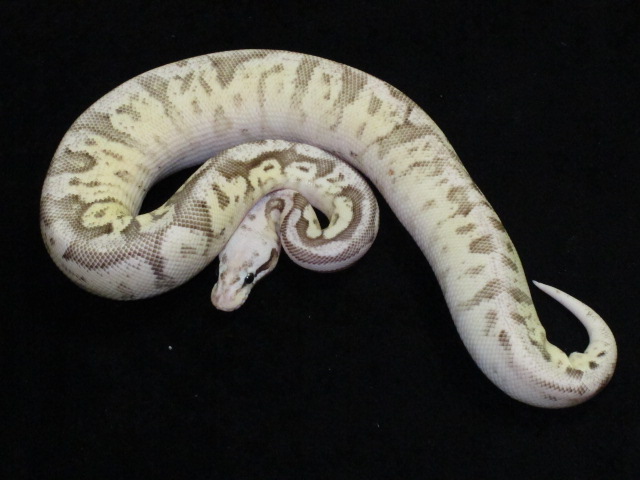 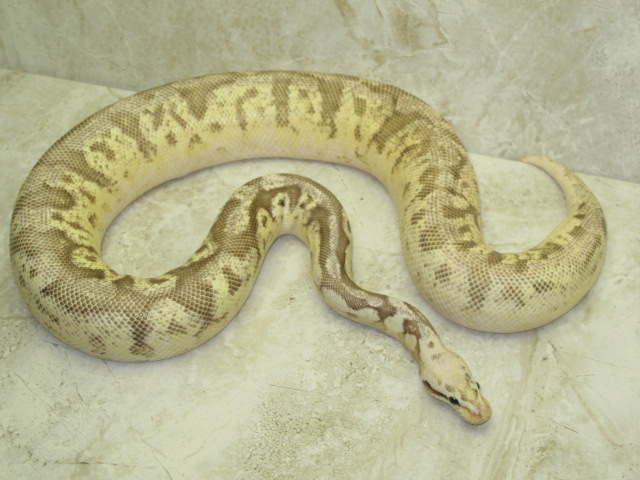 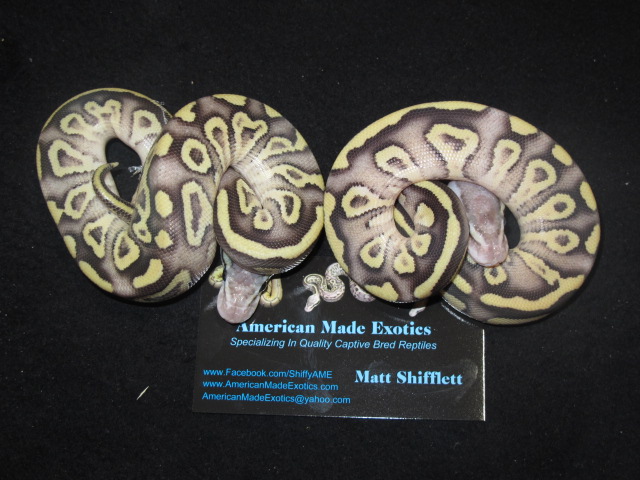 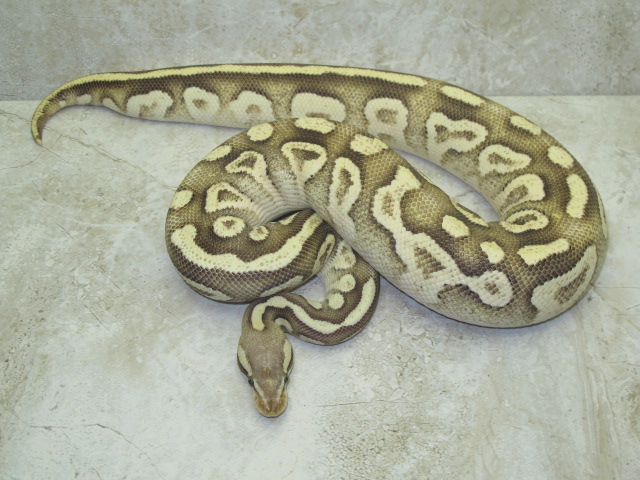 The following season I FINALLY got a lock between a Mota x Mota pairing.  It was tough to resist pairing one of the combo males to the original female but I stuck with single x single to be sure when I saw a super I knew that's what it was and not a combo super.  Finally a stroke of luck though because this girl laid a nice sized clutch of 9 eggs and I hit 4 supers, 4 motas, and 1 normal.  The supers were solid white with black eyes and after a few sheds one produced a few very faint yellow spots.
At this point as we wind down the 2014 breeding season this is where we are with the project.  There are a handful of other breeders doing Mota x different Black Eyed Lucy allele pairings in 2015 and hopefully something cool pops out of those clutches for them.  There have not been any combos produced with any of the other Black Eye Lucy allele animals yet so still a lot to do with the project.  I'm always pessimistic about dinkers so until something cool pops out I will treat it as just a different version of something already on the market.  I believe all though the mota combos are consistently nicer and cleaner than most of the fire/sulfer/etc combos it likely is just an imported different line.  I know those working with it are a lot more optimistic but only time will tell.  I have absolutely no problem playing with it when the "worst case scenerio" is MOTA ends up being just an imported premium nicer version of some of the black eyed lucy complex animals already readily available.  Personally that is what I believe but hopefully those doing pairings of MOTA x Fires or Discos this 2015 season end up proving me wrong and something awesome pops out! 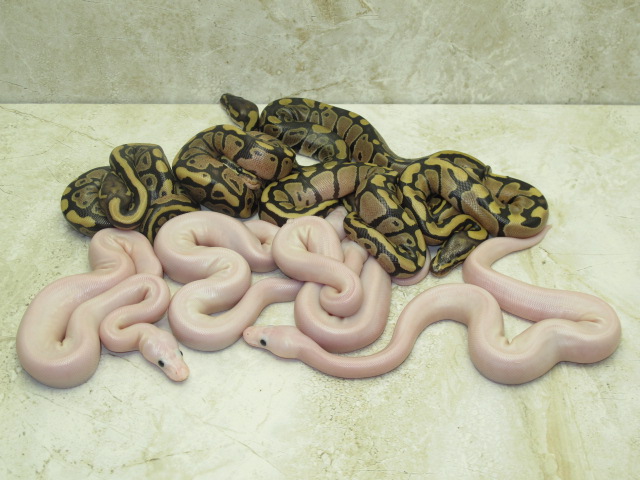 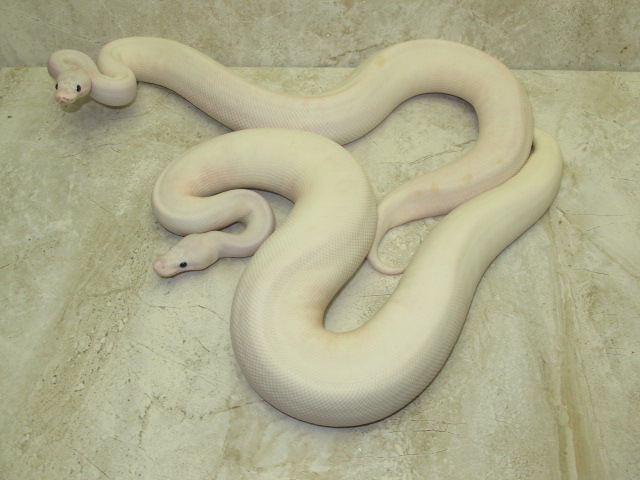 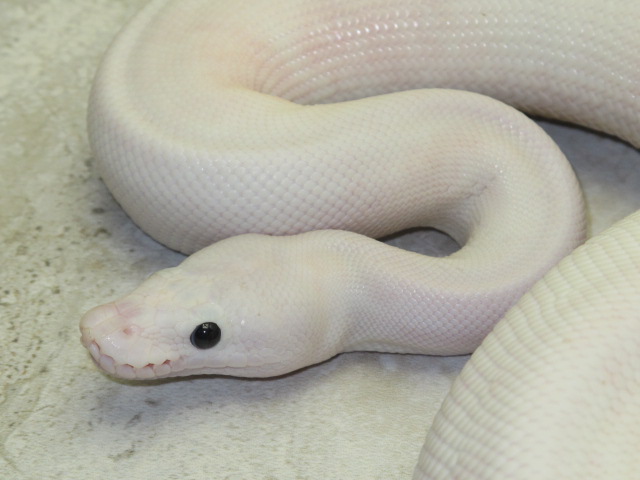 Below: Super Mota and Mota 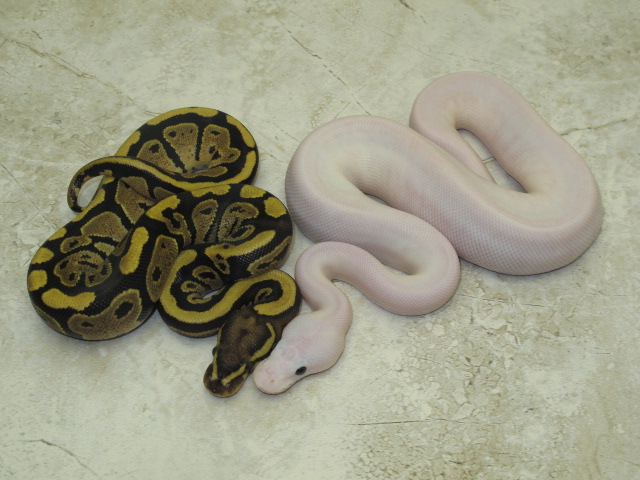 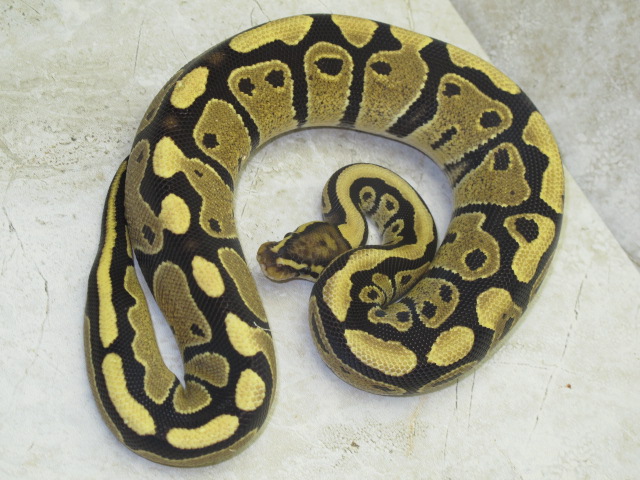 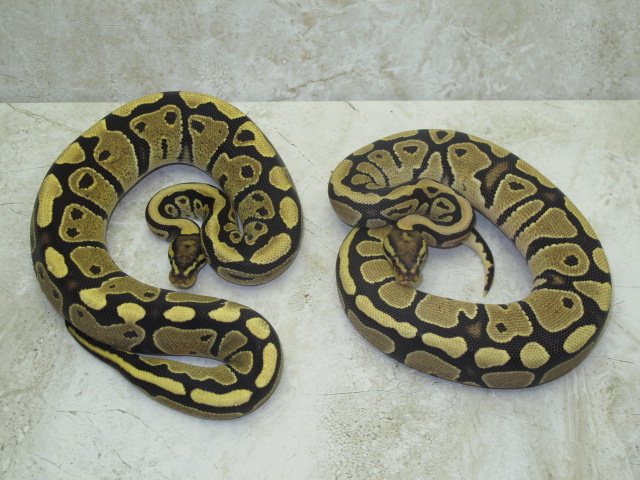 The 2015 season really started to show some of the potential this MOTA gene has when plugged into other genes and combos.  Lots of very pretty eye candy produced this season and I can not wait to do even more with it next year!!  Hopefully 2016 season will bring some eggs from Super Mota x fire to be 100% sure they are compatible on the same allele.  After seeing the 2015 season babies I am still confident the Mota is just a different version of the fire/sulfer type animals on the market.  I am also extremely confident after seeing the 2015 babies that in this case slightly different version translates to slightly better version!  We will have a lot of babies in 2016 in this project and hopefully the quality of the combos continues to blow us away as we see more and more of what it is capable of producing.  We are also extremely excited to see what those that purchased Mota and Mota Combo animals do with it in their own collections!